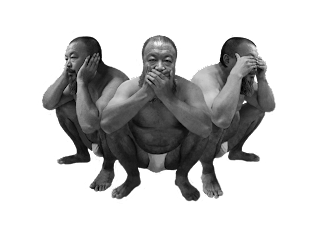 Portraying Chinese dissent artist Ai Weiwei, the work ironically refers to principles of Three Wise Monkeys: ‘hear no evil, see no evil, and speak no evil,’ that arguably originates from Analects of Confucius: "Look not at what is contrary to propriety; listen not to what is contrary to propriety; speak not what is contrary to propriety; make no movement which is contrary to propriety" (非禮勿視，非禮勿聽，非禮勿言非禮勿動). Instead of reviving its original teaching of moral value, the authorities adopt Confucianism in order to constrain freedom of speech in China in the 21st century.
Being concurrent with social turbulence in Middle East since spring of 2011, many Chinese intellectuals and activists including Ai Weiwei have been secretly detained for criticizing social injustice that the government considers ‘inciting instability and subversion.’ The international community’s outcries for releasing dissidents have limited impact. Although released in August 2011 after spending 81 days in jail, Ai is not set free – he addresses worries of being a rights activist in the future, because "they can make me disappear.”
During Ai’s secretive detention, many leading global art institutions call for the release of the artist. As Chinese, we intend to remind the world that freedom of speech remains gravely suppressed in this society that announces the ‘freedom’ is ‘evil’ for Chinese people. We intend to deploy AR technology to launch this project at leading art institutions around the world, therefore continue informing global audience of the condition of freedom of expression in China.
Three Wise Monkeys is also proposed to participate Manifest.AR group event 'The Art of a Placebo' at Digital Art Week. The Three Wise Monkey is designed for citizens enduring oppression of free speech. It can be used as a part of psychological treatment after a major social crisis such as indicated by the image sequence: The self-immolation to protest religious policies (F1), subway trains crash (F2), mysterious death of the village head who led petitions against alleged abuses by local government  (F3), or earthquake smashing poorly constructed school buildings to result death of thousands of students (F4). Three Wise Monkey will effectively help individuals quell anger, therefore never offend the authorities. 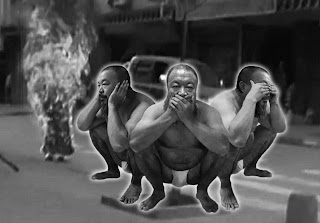 F1: 3 Wise Monkeys at
Aba County in Sichuan, where a Tibetan monk set himself ablaze 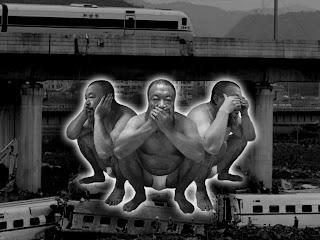 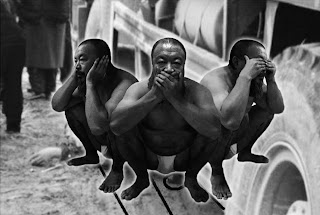 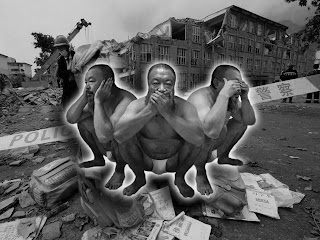 Email ThisBlogThis!Share to TwitterShare to FacebookShare to Pinterest
Labels: 'see no evil, do no evil', speack no evil, three-wise-monkeys