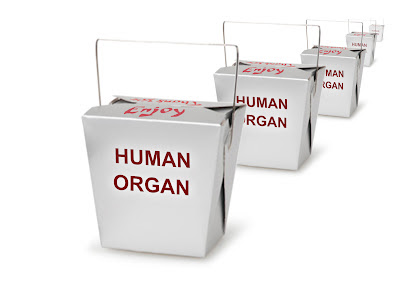 The work visualizes gruesome reality that Chinese government has been systematically harvesting organs from live Falungong practitioners for profit.
The inhuman practices were exposed by David Matas and David Kilgour's investigation report Bloody Harvest in 2007. In 2012, this issue again came to light when a Chinese official, who fled to U.S. Consulate in Chengdu, revealed evidences of human rights violations in China, in exchange for political asylum. However, this topic remains a taboo among Chinese intellectuals fearing persecution by the Party. While the country set new regulations prioritizing organ transplantation operation for domestic patients, demands from foreigners has driven the 'market' initially and continuously. We therefore intent to arouse greater awareness within the international community by visualizing the issue with art.

Email ThisBlogThis!Share to TwitterShare to FacebookShare to Pinterest
Labels: organ harvest in china