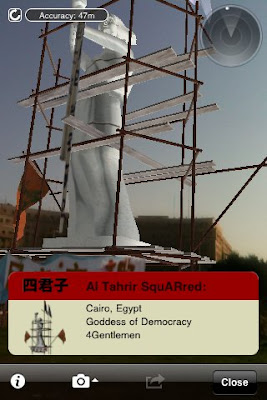 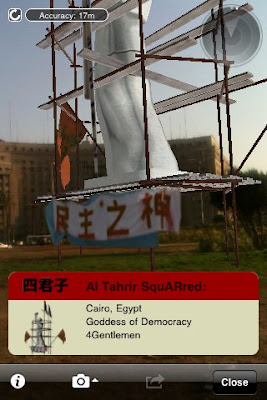 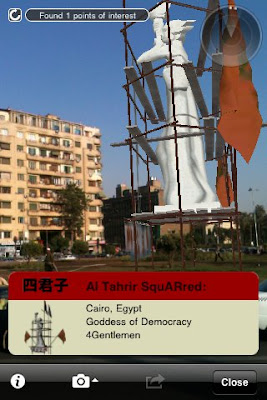 The Goddess of Democracy installed in Al Tahrir Square, Cairo. Documented by Warren Armstrong, June 28, 2011.
Posted by Augmentationist at 03:58 No comments:

View A Single Spark, by 4Gentelmen in a larger map

'In the middle of these online discussions, a new type of political action, critical public debate, entered contemporary Chinese life.'

'If state power and market forces have given birth to the Internet as a new sphere of social and political life, will the same forces take away this life, as they did in Habermas’s analysis of the eventual refeudalization of the public sphere?'

First, the Internet has given rise to a new type of political action, online critical debate; it facilitates the articulation of social problems and has shown some potential to play a supervisory role in Chinese politics. Through the use of the Internet, citizens are becoming better informed about and more engaged in social and political affairs.
Second, existing social organizations have developed an online presence while virtual communities have been built on the Internet. The use of the Internet by China’s environmental groups and NGOs demonstrates some new possibilities for organized civil society action. It also indicates how elements of Chinese civil society may be linked with the global civil society in ways previously unimaginable.


Third, new forms and dynamics of protest related to the Internet have appeared in Chinese civil society. Collective protest relies on communication media to spread its message and organize activities.


Evidence presented in this article shows that the Internet can facilitate protest activities in effective ways. Yet online protest is more than a new protest strategy. It is also a new field of struggle involving the uses and abuses of new information technologies. In this sense, online protest represents the growth of a contentious civil society in China.


Public debate, social organization and protest that take place on the Internet in China are linked in umerous ways with the global community, including the Chinese diaspora around the world....The virtual community of the ‘Forum of Chinese Educated Youth’, for example, clearly crosses national boundaries. The porous and networked nature of the Internet thus ties China’s civil society to the global community. Their interpenetration is a source of energy for China’s incipient civil society. Such interpenetration enhances information flow critical to civil society activities. ...Foremost among these are the online constructions of personal and collective identities. Both personal and collective identities are tied to civil society, not the least because they directly affect what Chamberlain has called ‘the quality of civil societal life'.By this he means the internal solidarity of a civil society as communities of autonomous individuals. It is not that the autonomy of civil society from the state is not important, but that it is not enough, because ‘What bonds civil society and its components are forces working from the inside out, not from the outside in’.


...how does the use of the Internet shape personal identities? In the long run, can Internet-based discourse and interactions contribute to a civic and participatory culture? How may the Internet be used to articulate collective identities based on class, gender, ethnicity, region and above all, the nation? How do the online constructions of various forms of collective identities impinge on civil society in China? ...They are important areas for future research.

- GUOBIN YANG, The Internet and Civil Society in China: a preliminary assessment 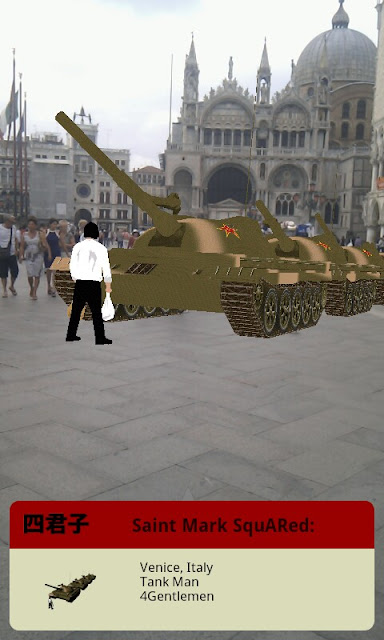 'The world without spirit is a wasteland. People have the notion of saving the world by shifting things around, changing the rules, and who's on top, and so forth. No, no! Any world is a valid world if it's alive. The thing to do is to bring life to it, and the only way to do that is to find in your own case where the life is and become alive yourself.' - Joseph Campbell, 'The Hero's Adventure,' The Power of Myth


'BEIJING (AFP) – Thousands of Chinese and foreign tourists flocked to Tiananmen Square on Saturday, the anniversary of the deadly 1989 crackdown on mass pro-democracy protests, amid a noticeable police presence. '