Tiananmen: How Wrong We Were - by Jonathan Mirsky

... ... The next morning, Sunday, June 4, I cycled back to the edge of the square just in time to see soldiers mow down parents of students who had come to look for those who had not returned home and who were feared to have been killed and their bodies burned. While I lay in the grass at the side of the avenue, doctors and nurses from the Peking Union Hospital (where my father had briefly worked in the early Thirties) arrived in an ambulance and in their bloodstained gowns went among the fallen; the soldiers shot them down, too. I managed to fly back to London later that day. Hundreds were shot in the square that night and the following morning, or crushed by tanks, and the shooting up and down the streets and avenues of the capital continued for several days. Long red and gold signs hanging outside buildings that had said, “Support the Students,” were quickly replaced with others proclaiming, “Support the Party.” A decree went out: “No Laughing in Tiananmen Square.” Tank tread-marks scarred the main roads for a year and bullet holes pockmarked the buildings along those roads. Those scars remained until 1990 when the center of capital was scoured clean for the Asian Games. ... ...
Posted by 4Gentlemen at 13:08 No comments:


[Note that the first part of this video is the CNN broadcast from May 16. The second half is footage of the "Tank Man" confronting government tanks, which did not take place until June 5, 1989.]

http://www.artpractical.com/column/locating-technology-/
By Genevieve Quick May 14, 2014

Artists have long used approaches like elaborate and surreal narratives and phenomenological or physical experiences to explore the breadth of reality. At its most basic level, reality is a physical or social interaction with a string of consequences that extends beyond oneself. Artists, philosophers, scientists, and technologists continue to unravel reality as a complicated matrix of self and perception. The emerging technology of augmented reality (AR) creates hybridized spaces that merge virtual objects and narratives with the everyday space we inhabit. As AR develops solutions for the many real-world issues it faces (like application, ownership, access, adoption, and format), these issues affect AR’s artistic and political potential.
......
Using smartphones,1 AR participants scan a Quick Response (QR) code or AR symbol to interact with virtual objects that appear superimposed on the everyday world through their phone’s screen. Unlike two-dimensional images, AR objects are vector-based renderings with X,Y, and Z axes—the same type of data used in 3D printing. Moreover, artists and designers assign global positioning satellite (GPS) coordinates to their objects, placing them in a meta-space that overlaps the tangible space users occupy. Users’ phones coordinate their GPS location with that of the AR object; as participants move through space, the virtual images on their smartphones shift in perspective. As its name suggests, AR attempts to augment, which on a rhetorical level is an improvement made through addition. In contrast, its technological cousin virtual reality (VR) attempts to simulate, which allows designers and artists unlimited freedom to create the context for their narrative or experience. While apps like Layar2 suggest that AR is an additional level placed upon reality, it is actually a hybrid space that merges users’ real, physical embodied location with the virtual and visual experience. 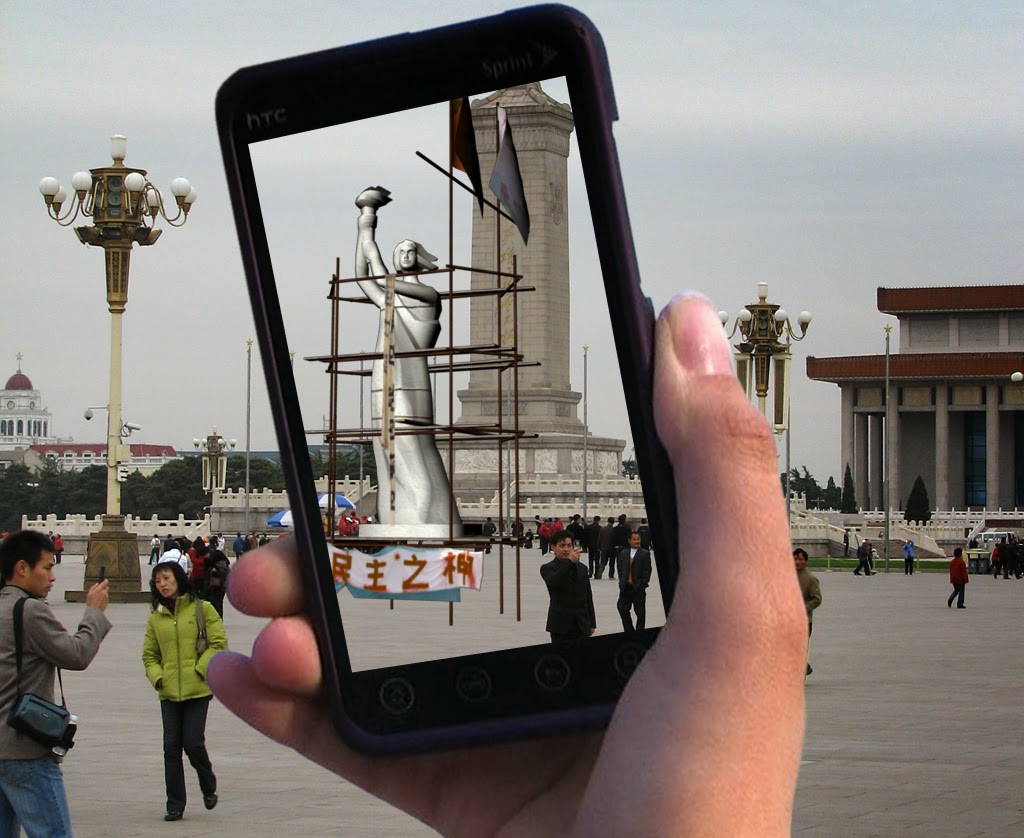 Subsequent to the 1989 Tiananmen uprising, when the People’s Liberation Army violently thwarted protestors, Chinese government censors have attempted to eliminate references to the uprising on the internet and mass media.5 In response, the exiled and anonymous collective 4Gentlemen6 created 3D models of the Goddess of Democracy—like the one erected by students at the Central Academy of Fine Arts during the demonstration—and “Tank Man,” the anonymous figure who stood against a plethora of tanks on Chang’an Avenue. Photographs of the Goddess of Democracy and “Tank Man” are widely circulated around the world and have become iconic images of individual bravery and military authority. 4Gentlemen have placed their AR objects at the GPS locations of the Tiananmen Square protests. Additionally, Google Maps indicates that the AR Goddess of Democracy has been placed at international squares of public protest, like Green Square, Tripoli, Libya; Al Tahrir Square, Cairo, Egypt; Tahrir Square, Sana’a, Yemen; Pearl Square, Al Manama, Bahrain; Union Square, NY; and Piazzo San Marco, Venice, Italy, to name a few.7 Although erecting physical monuments of protest is challenging in repressive regimes, thus far these AR objects seem to be able to resist censorship. Unlike physical monuments, these AR monuments are easily replicated and moved, and can linger long after protests have occurred.
......

With fundamental questions about the platform and its use, adoption, and so on still to be determined, AR poses a potential political and economic battle for the everyday space we inhabit. As billboards sprung up along the once ill-defined spaces of the interstates, these routes became commodifiable. Additionally, the internet, the so-called “super highway,” has become dotted with banner ads as commercial interests compete for our attention. Our everyday space, like when walking down the street, may also become a contested zone, as every physical point is a GPS location with the potential for being a pop-up ad or a location for governmental censorship or surveillance.